The U.K. Department of Energy and Climate Change has published updated renewable energy statistics, reporting the renewable share of electricity generation reached a record 22.3 percent during the first quarter of this year, up 2.6 percent when compared to the same quarter of last year.

According to the DECC, renewable electricity generation was 21.1 TWh during the first quarter, up 15 percent from 18.4 TWh during the same quarter of the prior year. Renewable energy capacity reached 26.4 GW at the close of the first quarter, up 23 percent from one year earlier. Bioenergy accounted for 17 percent, or 4.6 GW, of renewable capacity. 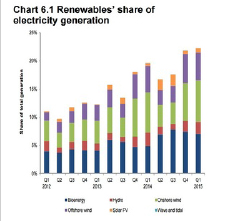